On Oct. 15, County Executive Dow Constantine, the Housing Development Consortium, and Laborers Local 242 partnered to host an event in support of the Veterans, Seniors, and Human Services Levy, which will be on the ballot on Nov. 7. The levy strengthens our communities by providing job training, employment opportunities, and housing stability to veterans, seniors, domestic violence survivors, and more. The levy extends existing efforts that have proven effective in reducing unemployment, homelessness, and emergency medical costs.

Labor and housing advocates have joined together to support this important cause. Partners from labor include Laborers Local 242, IAM 751, Teamsters Joint Council 28, and others.

To find out more about how you can support the levy, please visit https://yesonprop1.com/ or http://www.housingconsortium.org/vshsl/. 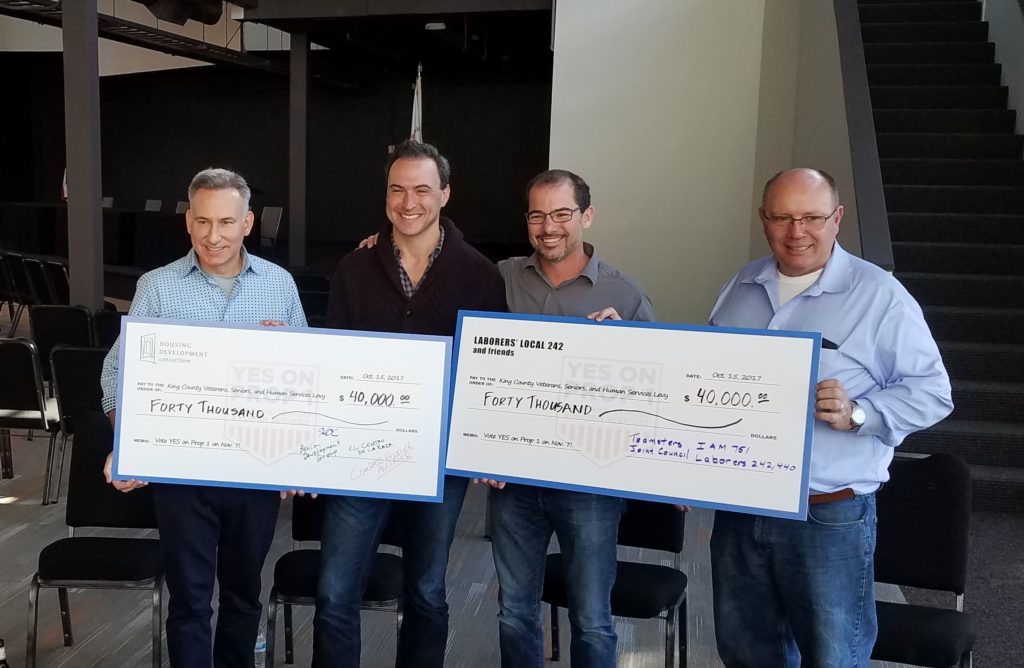 Over the course of July, Beacon Development Group’s Seattle office will be hosting and participating in two phone banks for the city’s 2016 Housing Levy. The property tax, first approved off the ballot in 1981, will be up for renewal for the sixth time in August. The proposed $290 million levy will be dedicated to producing affordable housing options and providing support to low-income families, seniors, individuals with disabilities, and low-wage workers within Seattle.


After expanding upon its predecessor and leveraging every city dollar with $3 dollars from other sources, the 2009 Housing Levy outperformed expectations, exceeding the goal of producing 1,670 affordable housing units by roughly 30% and providing emergency rent assistance to 2,442 families. This time around, the mayor is proposing to expand the levy once more. The levy can be broken down into four main programs: Each program would prioritize individuals making below 30% AMI, but would stretch to support those making up to 60% AMI.

The 2016 tax would cost just $122 annually for owners of median value homes. While the levy is focused on housing and homelessness prevention, the effect of taxpayer dollars would extend far beyond this. The Housing Levy would produce thousands of jobs in construction and management, increase the city’s energy and water efficiency with green building standard projects, and most importantly, foster inclusive, equitable communities throughout Seattle. Beacon Development Group is proud to be a part of the effort to renew the Seattle Housing Levy.

Each year in January the Seattle/King County Coalition on Homelessness sponsors the annual One Night Count of homeless people in King County, Washington. Over 1,100 volunteers come together and fan out across the county to count the number of men, women, and children who are homeless and sleeping outdoors without shelter. At the same time, staff at agencies operating shelters and transitional housing account for people staying in their programs. The resulting numbers are critical to understanding the magnitude of homelessness in this region and to crafting strategies and solutions to this problem. Beacon staff gather at 2am in Capitol Hill, Seattle to begin One Night Count

Beacon staff gather from 2:00-5:00am each year to participate in the One Night Count. According to the Coalition on Homelessness the number of unsheltered homeless people counted this year totaled “at least 4,505 men, women, and children. This number is an increase of 19% over those found without shelter last year. This number is always assumed to be an undercount, because we do not count everywhere, and because many people take great care not to be visible.” Complete statistics from the count can be found here.

These numbers are sobering news for the Seattle/King County region and underpin the urgent need for aggressive solutions to homelessness. Through its volunteer and professional efforts, Beacon Development Group will continue to advocate for more resources to address the number of unsheltered people in Seattle/King County, such as the renewal of the Seattle Housing Levy later this year, and will continue to partner with clients to build quality, safe, and decent affordable housing to permanently transition people and families off the streets.

With Sound Transit 3 on the horizon and the State Legislature recently enacting policy opportunities and tools for advancing affordable housing near transit, this is a very exciting moment in the region’s history. Therefore the key thread of the panel was recognizing and overcoming barriers by enacting tools locally to create affordable housing around transit centers. Panelists touched on the following topics.

Both policymakers and developers stressed that a deeper level of conversation around these issues must take place for TOD barriers to be effectively overcome. Policymakers urged developers and advocates to develop as much consensus as possible in order to leverage policy making opportunities. The developers on the panel stressed that early involvement is key to success of TOD as well as flexibility around the deployment of funds, both in terms of incomes served and uses allowed in developments (i.e. the mix of housing, commercial and community space). 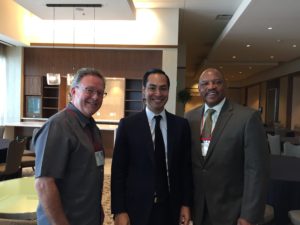 In late July, Paul Purcell, President of Beacon Development Group, had the pleasure of meeting Julian Castro, United States Secretary of Housing and Urban Development, at the NAHRO (National Association of Housing and Redevelopment Officials) Summer Conference in Austin, TX. Throughout the year Paul travels to conferences such as this to advocate for stronger national and regional affordable housing resources and policies. Also pictured here is Andrew Lofton, Executive Director of the Seattle Housing Authority.